As one of the key pillars of Britain’s automotive landscape, the Ford Fiesta barely needs an introduction.

First introduced to us in 1976, the Ford Fiesta is known for its low costs, reliability and popularity amongst new drivers. Over its long lifespan, the comfortably cheap Ford Fiesta has seen its fair share of facelifts and rejuvenation. Its eight-generation evolution has moulded this motor into a thoroughly accomplished small car. It is so accomplished that the American motor topped the sales charts in 2019 and 2020.

One of the biggest factors contributing to their popularity is the sheer number of colours, trims and variations available. In fact, there’s a Ford Fiesta to suit most tastes. From the cheaper Ford Fiestas that offer a colourful lineup, a sportier-looking ST3 performance pack that’s loaded with some extra power and even several petrol engines with mild-hybrid technology, there really is an unmatched variety with the US industry leader.

Of course, the latest Fiesta has some fierce competition from some equally big names. Rivals such as the (non-electric) Peugeot 208, the Seat Ibiza and the Volkswagen Polo to name a few. To combat these industry powerhouses, Ford has packed a punch with the 2022 facelift. The motor remains a highly appealing option, regardless of the dropping of the three-door model.

Now that Ford is finding itself fighting back more competitors than ever, is the revised Fiesta enough to keep the crown? Let’s find out.

The Body, Interior Layout and Finish

In the 2022 facelift, the Ford Fiesta has had some modernisation but still remains as recognisable as ever. The body features a reshaped bonnet that allows for the nose to look higher, as well as new lights featured on the front and back. The headlights up front are slimmer and house some fantastic LEDs as standard and the back seems to provide a fancy matrix of LEDs as an option. The front also features a new and improved grille that comes in different variations – depending on the trim level you opt for.

For its size, the Fiesta is as practical as you could expect. Considering the fact that this is still a modern small car, there is plenty of room for four adults and the boot can easily fit in your standard baby buggy or a food shop. 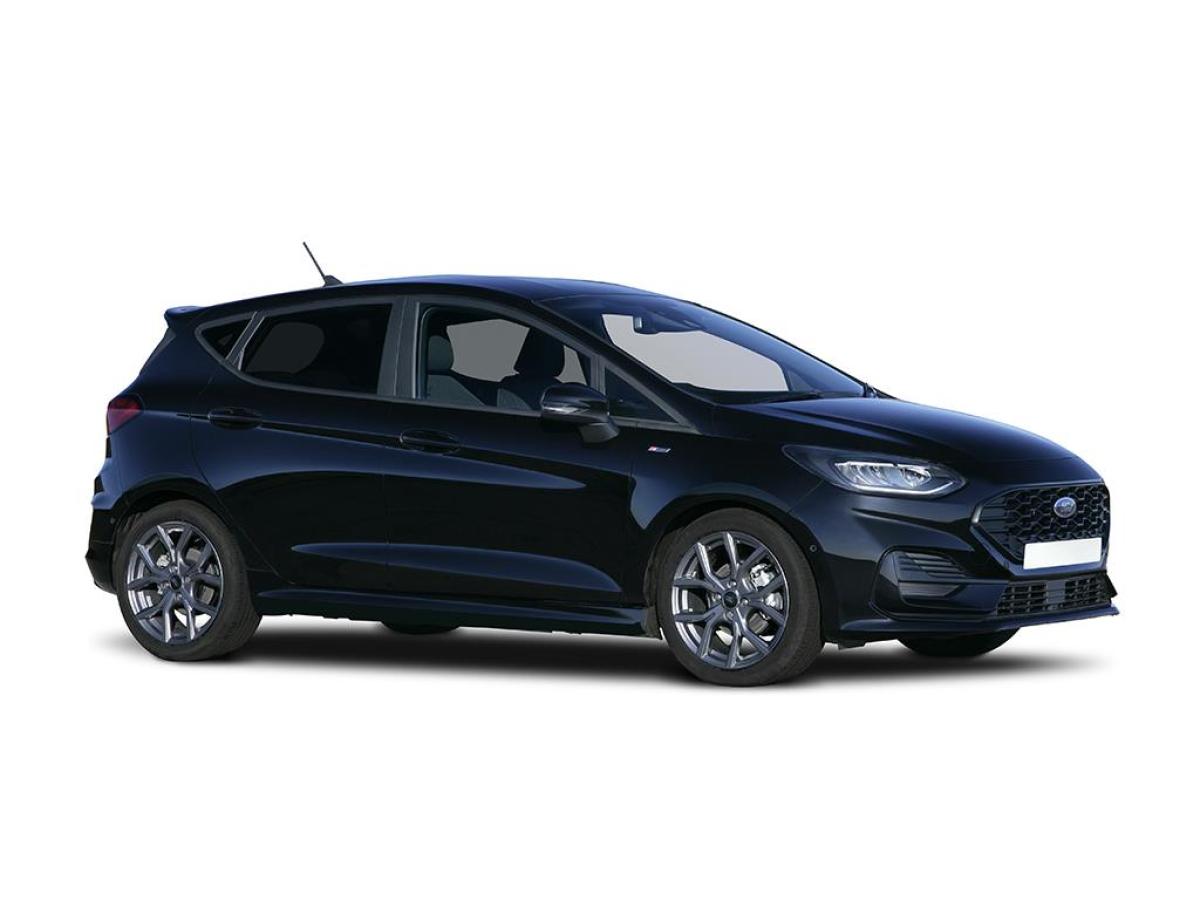 When it comes to the interior design, you can’t really fault it. While it isn’t quite as funky as the likes of the Citroen C3, it is filled with good quality materials and soft-touch plastics. Plus, Ford’s beautifully modern 8-inch SYNC3 touchscreen infotainment screen is a great feature and is easy to use while driving. The physical controls for the air conditioning and climate control are logical and clearly marked, and it is quick and easy to set up phone connectivity.

While the cheapest Ford Fiestas are smart enough for most drivers, it’s higher up the model range where things get interesting. The ST-Line Edition, such as the Ford Fiesta ST3 performance pack, have a sporty look based on the Fiesta ST’s upgrades.

One trend that has stuck throughout the Fiesta lineup is the passion for a quality drive. The ST model is known for being a lot of fun and is surpisingly fast, but even the most basic Fiestas are fantastic to drive. The Ford’s six-speed manual gearbox and great control weights make for a smooth ride and plenty of composure on twisty country roads.

The engine range is mostly made up of 1.0-litre petrol engines. If we pop open the bonnet we will find a Fiesta 1.1 Ti-VCT that offers a simpler, albeit slower, 75hp model if you want to keep things simple. The Fiesta ST, however, features a 1.5-litre turbo with 200hp for rather impressive performance and a beautiful roar.

The majority of the new Fiesta line-up uses a three-cylinder, turbocharged EcoBoost engine. The entry-level 95hp (170Nm) version provides adequate power to push the small car from A to B. Practically speaking, the 95hp engine isn’t much slower than the next-up 125hp (or earlier 140hp) engines. Both are muscular, quiet, smooth to rev out and don’t break the bank. Many find that the 125hp EcoBoost engine is a great middle-ground for the new lineup as it offers improved performance. The real advantage, however, is the way it pulls from low revs, with 210Nm torque, so you don’t need to shift down gears so often.

The Fiesta is popular with UK drivers both new and experienced because it has an engine to suit all budgets. The slick shift action adds to the fun of driving and it is incredibly easy to use around town.

Is the Ford Fiesta a Good Car?

Over the past two generations, the US carmaker transformed the humble Fiesta from an acceptable entry-level small car into a genuinely desirable supermini that is seen up and down the country. We’re not saying that Ford’s revisions to the Fiesta are going to revolutionise the automotive market, but it helps keep even the cheapest Ford Fiesta’s within the top spots of the supermini segment.

If you are looking for that same Fiesta security and reliability but need an extra layer of personality then the Ford Fiesta ST3 performance pack is what you need. Take away the fact that the sporty ST-Line has incredible handling and is engaging and fun, this performance pack is a lineup you’re not likely to lose in a car park. With a coat of deep orange paintwork and a set of grey ten-spoke wheels, it’s by far the least subtle hot Fiesta so far.